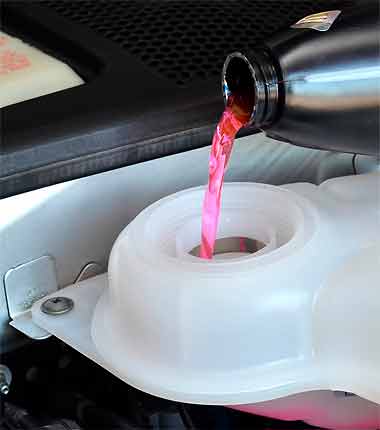 Every year, many children and adults are poisoned by ethylene glycol. It is a substance that is common in antifreeze. You can reduce the risk of accidents by storing the liquid in its original packaging and in a place out of the sight and reach of children, by avoiding siphoning and by being careful to wipe up spills.

Antifreeze is used to prevent engines in cars and boats from overheating. Antifreeze often contains ethylene glycol to prevent the liquid from freezing and to lubricate and protect the engine from corrosion. Pure glycol is colourless, but manufacturers often add colouring to the finished product, for example green or blue.

Every year, many children and adults are poisoned by ethylene glycol, which is commonly used in antifreeze. Ethylene glycol can cause severe symptoms such as seizures and loss of consciousness as well as severe kidney damage if ingested. Even a sip can cause severe poisoning in children. Adults are occasionally poisoned after ingesting antifreeze when they drain antifreeze from the engine by siphoning. Another common reason for poisoning is that you accidentally drink ethylene glycol that has been poured into another container, for example a PET bottle. It is also not uncommon for dogs to be poisoned by ethylene glycol spills because they are attracted by the sweet smell and taste.

How to reduce the risk of accidents with antifreeze

Call 112 if a child has ingested ethylene glycol.

If someone has ingested ethylene glycol, it is important to get help quickly. Therefore, call 112 immediately and request Poisons Information (Giftinformation).

In Sweden, certain industry associations have voluntarily agreed to prevent accidents associated with antifreeze containing ethylene glycol. The industry agreement stipulates that companies should add bittering agents to antifreeze with ethylene glycol, which gives it an unpleasant taste. The packaging should also have a childproof closure.

Read more at Innovation and Chemical Industries in Sweden - IKEM